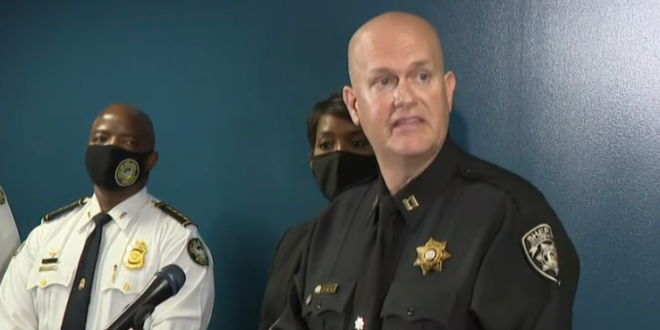 “Yesterday was a really bad day for him and this is what he did,” Jay Baker said during the joint news conference with the Atlanta Police Department about 21-year-old Robert Aaron Long.

But it seems the same spokesperson shared racist content online, including pointing the finger at China for the ongoing coronavirus pandemic—the same vitriol advocates say has fueled a horrific surge in violence against Asian Americans.

In a disturbing press conference, captain Jay Baker of the Cherokee County Sheriff’s Office said that suspect Robert Aaron Long “was pretty much fed up and at the end of his rope,” adding, “Yesterday was a really bad day for him, and this is what he did” https://t.co/aPSZJaKrOi

🚨BREAKING: Police Captain Jay Baker — who seemingly excused the white male mass shooter who murdered 6 Asian women as having “had a very bad day” — previously posted a picture of a racist t-shirt that said Coronavirus was imported from “CHY-NA.” #StopAsianHate pic.twitter.com/fKG48kv9VJ

Makes you wonder why he seemed sympathetic to the man who allegedly murdered 8 people, including 6 Asian women.🤔 pic.twitter.com/1HHn6hSXFG

Previous 12 GOP Reps Vote “No” On Medals For Capitol Police
Next CHATTER AWAY: Overnight Open Thread