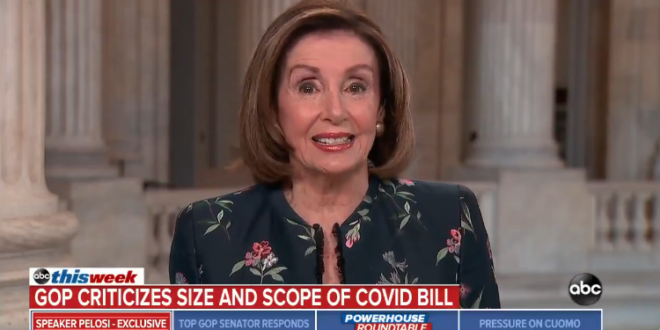 Pelosi: Republicans “Vote No And Take The Dough”

ABC News has the transcript:

STEPHANOPOULOS: Let’s start with the COVID relief package. I outlined some of the benefits just now. But there was unanimous opposition on the Republican side. Most said the package was too large, not targeted at COVID relief. And our next guest, Senator John Barrasso, argues that it will overheat the economy and fuel inflation. What’s your response?

PELOSI: I totally disagree. The fact is that it’s strongly bipartisan across the country. It’s only in the Congress of the United States where the Republicans have refused to meet the needs of the American people, where they didn’t vote — as I said of them, vote no and take the dough. You can be sure that all of their states and communities will be benefiting from this, and they won’t be complaining about it back home.

“I totally disagree,” House Speaker Nancy Pelosi tells @gstephanopoulos when asked about GOP criticism of the sweeping COVID relief bill. “The fact is that it’s strongly bipartisan across the country—it’s only in the Congress of the United States.” https://t.co/dp5vnVyLvr pic.twitter.com/4K0BWTHyak

Previous Fauci: We’re Not In The End Zone, Don’t Spike The Ball
Next FBI: Rioter Stole Cop’s Badge, Buried It In His Backyard