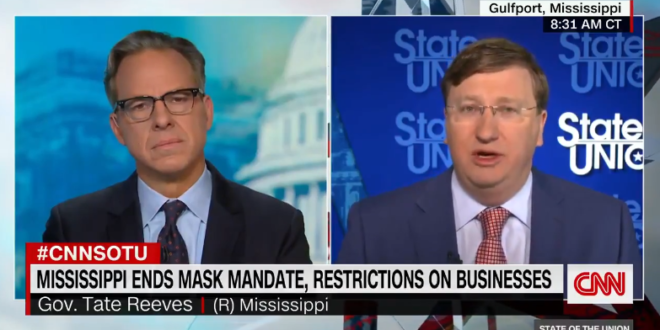 Mississippi Gov. Tate Reeves (R) defended his decision to revoke the state’s mask mandate on CNN, describing the move as backed by data and a necessary step to boost the state’s economy. Why it matters: Although hospitalizations have dropped, Mississippi had the largest increase in the average of new coronavirus cases over a seven-day period in the country as of March 2.

“We have to get our economy rolling so that individuals can get back to work. And I think that’s critically important,” Reeves told anchor Jake Tapper. “And oh, by the way, unlike President Biden, who wants to insult Americans and insult Mississippians, I actually trust Mississippians to make the decisions. They’ve proven throughout the last year that they can do so.”