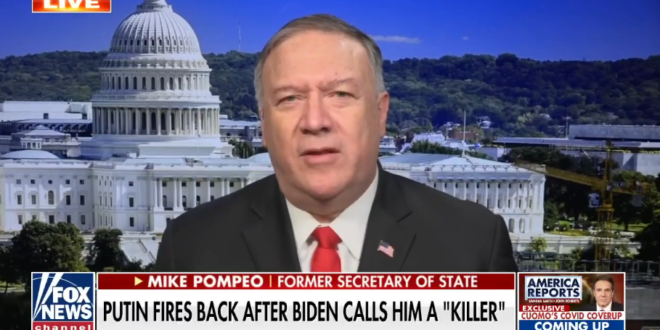 Mike Pompeo: Biden Was Right To Call Putin A “Killer”

“You could argue the prudence of the American president calling the Russian president a killer,” said host John Roberts. “But are the facts in dispute here?” Despite first condemning Biden for using “empty rhetoric and name calling” in his comments about Putin, Pompeo conceded that the president might be right to call Putin a killer.

“Well he worked for the KGB for an awfully long time and we’ve seen what he did to Mr. [Alexei] Navalny, the intelligence committee made pretty clear that they knew this was a Russian operation that intended to kill Mr. Navalny,” Pompeo responded. “I think those facts speak for themselves.”

Pompeo Concedes That Biden is Probably Right to Say Putin is a Killer https://t.co/9XdZWH78bH

Previous The Kraken To Appear At “Summit” With Militia Leader
Next Bongino: Boring Biden Is “Just Terrible For Talk Radio”