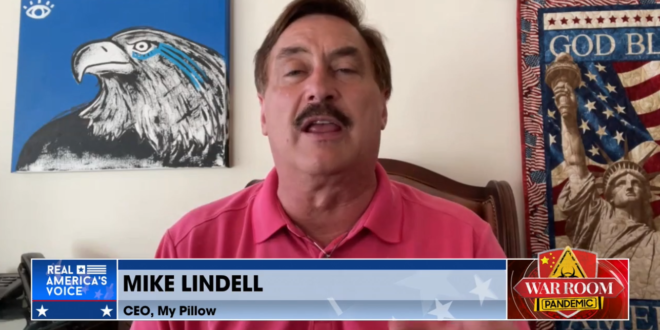 Mike Lindell: SCOTUS Will Make The 2020 Election “Go Bye Bye” And Trump Will Be Back In Office By August

“What I’m talking about, Steve, is what I’ve been doing since Jan. 9th. All the evidence I have — everything is going to go before the Supreme Court and the election of 2020 is going bye-bye.

“It was an attack by other countries, communism coming in. I don’t know what they’re going to do with that after they pull it down.

“Donald Trump will be back in office in August!” – Mike Lindell, shouting over Steve Bannon, who closes by calling him a “patriot and a warrior.”

Mike Lindell declares that as a result of voter fraud lawsuit he’ll soon be filing, “Donald Trump will be back in office in August.” pic.twitter.com/5Ewtd9SZ1O

I always laugh at Mike Lindell’s ability to drive the Left insane. Let’s all support Mike and defeat the other side’s attempt to cancel him. His products are great. (Contented customer in My Pillow pajama set shown here.) Go to https://t.co/83houproSq and use promo code DINESH pic.twitter.com/LlamW0vKTi

The problem is not that Mike Lindell says crazy, stupid stuff. The problem is that there are violent pro Trump supporters who believe this, egged on by @GOP leaders who lie about the election being stolen. That’s why National Guard troops in body armor are still at our Capitol. https://t.co/frszcA6Vpr