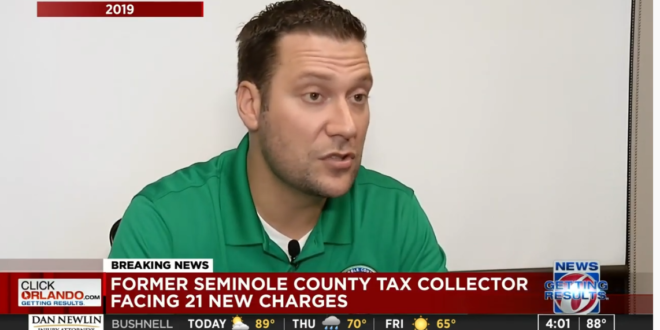 Until last year, Joel Greenberg was an ascendant political player in Seminole County, Fla., where he unseated a longtime incumbent in the race for county tax collector, won a political battle to allow his deputies to carry guns on the job and flaunted his connections to prominent Republicans with close ties to then-President Donald Trump, including Rep. Matt Gaetz (R-Fla.) and Roger Stone.

But last June his reputation fell apart in spectacular fashion when federal investigators arrested him on stalking and child sex trafficking charges, prompting his resignation. On Tuesday, the case against Greenberg, 36, gained national prominence after the New York Times reported that it had also sparked a separate criminal investigation into allegations that Gaetz had a sexual relationship with a teenage girl.

Prosecutors said in a grand jury indictment that Greenberg, as tax collector, took surrendered drivers licenses before they were shredded by office staff and created new IDs with his photograph but with the personal information of residents.

When federal agents first arrested Greenberg in the early morning of June 23 at his home in the gated Heathrow community, they said they found on the front seat of Greenberg’s SUV, which belonged to the Tax Collector’s Office, a backpack holding several fake IDs, according to court records.

A 2019 investigation revealed Greenberg had spent $3.5 million in consultant contracts, salaries to friends and associates, including giving a combined $644,000 to three of his groomsmen and another $677,000 to a campaign adviser. An audit released last December showed Greenberg wasted about $1 million in taxpayer funds, including buying body armor, weapons, ammunition and a drone.

Among the 14 federal charges Greenberg currently faces, he is also accused of stalking a political opponent — who is a teacher — by falsely accusing them of sexual misconduct with a student and of being “a segregationist and in favor of white supremacy.” Greenberg allegedly used fake Twitter and Facebook accounts to post the information and posed as concerned students in letters to the school where the victim works.

Greenberg also alleged used his tax collector’s badge to pull over a speeding driver. He is being held in an Orlando jail until his June trial after violating home confinement orders by driving to south Florida to “look for his wife.

BREAKING: Documents suggest that Rep. Matt Gaetz’s father was told his son’s legal problems could go away if he gave $25 million to help secure the release of Iranian hostage Bob Levinson https://t.co/59oUJJWMbc

“Matt Gaetz possesses text message screenshots, an email, and a typed document that purportedly support his claims that a federal investigation into his relationship with a 17-year-old is related to an extortion scheme against him.”https://t.co/jXAsHy3aNV

Whoa—Matt Gaetz has approached at least one criminal defense firm to represent him. Via CNN.

Even if Matt Gaetz was the subject of an extortion attempt, that wouldn’t absolve him of the alleged child trafficking. It just means that – separately – someone extorted him to help him cover up his crime of trafficking a child.

BREAKING: Florida prosecutors have filed a second superseding indictment against Joel Greenberg, the Florida politician associated with the investigation into Matt Gaetz. He is now also charged with embezzling $400k to purchase cryptocurrency for himself, wire fraud, and bribery.