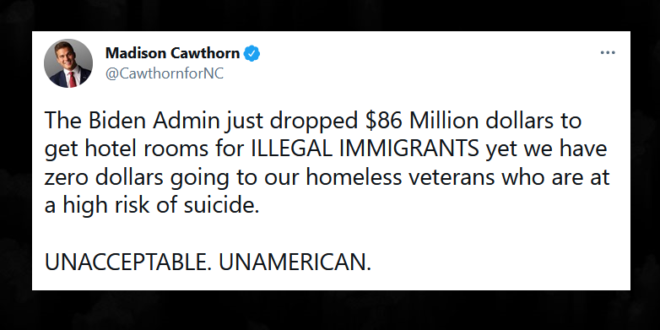 Newly-elected House member Madison Cawthorn (R-NC) attacked President Joe Biden Monday for his efforts on immigration, accusing him of failing to put homeless Americans before immigrants entering the country. However, his lie was quickly called out by another House member, Ruben Gallego (D-AZ), who filled Cawthorn (and the public) on just what has already been done to combat homelessness — and asked what he’s doing himself.

The Biden Admin just dropped $86 Million dollars to get hotel rooms for ILLEGAL IMMIGRANTS yet we have zero dollars going to our homeless veterans who are at a high risk of suicide.

The American Rescue Plan has billions of $$$ for Veterans’s homelessness. You voted against it…it so why do you hate Veterans? https://t.co/dTIr6foMmf

We just reported about how the American Rescue Plan allocated billions of dollars toward veterans homelessness, suicide prevention, health care.

Cawthorn voted against the bill. https://t.co/HkCDImAOum

Previous Security Researchers: No Threat To US From TikTok
Next DOJ Prepares Plea Discussions With Some DC Rioters