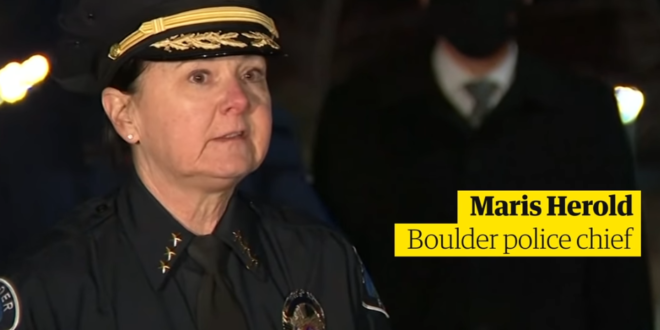 Law enforcement officials will hold a news conference this morning in Boulder, Colorado, at 8:30 a.m. MT (10:30 a.m. ET). Ten people, including a Boulder police officer, were killed Monday when a gunman attacked a King Soopers grocery store in Colorado. A suspect, who had been injured, was taken into custody, the authorities said. Videos showed a handcuffed man being escorted from the building by officers, shirtless and with his right leg appearing to be covered in blood.

UPDATE: Our next #BoulderShooting press conference will be at 8:30am Mountain time on Tuesday March 23 in front of the Boulder Police Department at 1805 33rd St.
Boulder, CO 80301. No new information will be released before then pic.twitter.com/9Ul6AawDyc

Previous Kremlin Refuses To Say Which Vaccine Putin Will Get
Next Homocon Riot Suspect Took $33,000 In Bailout Money