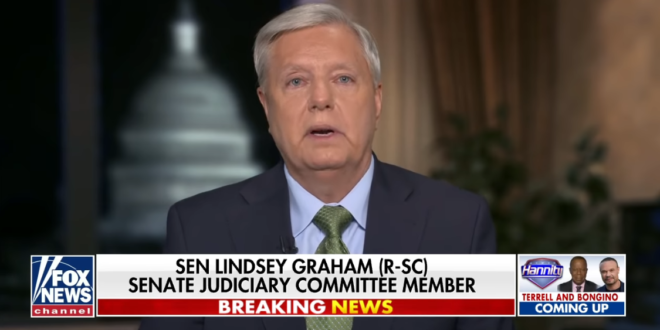 Lindsey Graham: If Dems Move To Talking Filibuster, “I Would Talk Until I Fell Over” To Stop The Bills [VIDEO]

Fox News has the transcript:

It would destroy the Senate as we know it. Anything big like this, you should be able to get a few votes from the other side, right? If you want to federalize the elections and do away with redistricting by the states and turn it over to some commission that will fundamentally change how you vote, if you want to go to ballot harvesting nationally and take authority away from the states, shouldn’t that be at least somewhat bipartisan?

If [Democrats] pick up one more seat in 2022, if they get 51 or 52 Democratic senators, they’re going to abolish the filibuster and transform America. I talked to President Trump a lot today. He’s focused like a laser on making sure Republicans regain the Senate and the House to stop the most radical agenda in American history.

With a 50 50 Senate, you can’t do anything without unanimous consent that matters, and to have a quorum, you’ve gotta have 51 people present and the vice president doesn’t count. So if they did this, we could really shut down the entire Senate because we just won’t show up. And here’s what Biden needs to understand.

If you go to the talking filibuster, we will take the floor to stop H.R. 1. I would talk until I fell over to make sure that we don’t go to ballot harvesting and voting by mail without voter ID.

I would talk ’til I fell over to make sure that the Equality Act doesn’t become law, destroying the difference between a man and woman in our law. If they had 52 Democrats, they would cut Joe Manchin out and they would change the rules of the Senate.

You know, when we’re in charge, they write me letters, [and] want me to say I won’t change the filibuster to protect the Senate. Now they’re in charge and are willing to throw everything over. And at the end of the day, 2022 is the best hope for us to stop this crazy stuff.

.@LindseyGrahamSC says, “I would talk until I fell over,” to prevent the passage of the Voting Rights Act and Equality Act if the U.S. Senate changes the filibuster rules. #scpol