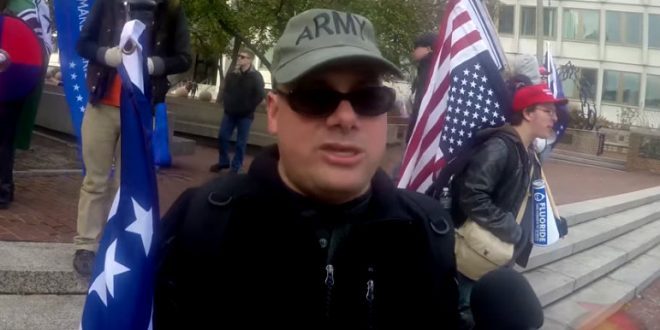 Lawyer: Accuser Rioter Free On Bail Has Stiffed Me

A Massachusetts Trump supporter who openly associates with known neo-Nazis and took part in the Jan. 6 Capitol siege has stiffed his lawyer, and continues to attend far-right political rallies while under indictment, according to the man’s attorney and photographs provided to The Daily Beast.

At best, say legal experts, Mark Sahady’s behavior is bad optics and could serve to irritate the judge deciding his fate. At worst, his actions could potentially constitute a violation of the bail conditions set by the court.

“I have a motion to disappear from the case because (1) my client hasn’t paid me at all for work performed in this case and (2) he is not returning my phone calls,” defense attorney Rinaldo Del Gallo III told The Daily Beast in an email.

Read the full article. Regular JMG readers will remember Sahady as the organizer of a 2019 attempt to stage a “Straight Pride” parade in Boston, a stunt that earned him fawning Fox News coverage and the support of homocon Milo Yiannopoulos and Proud Boys leader Enrique Tarrio.

Some rioters have apologized and promised to keep their behavior in check. Mark Sahady is not one of them. https://t.co/KkLWFocOam