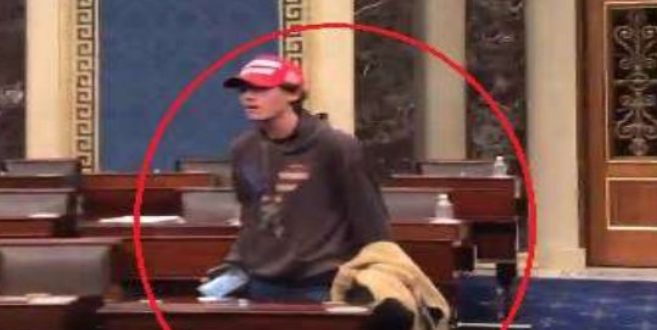 Bruno Joseph Cua, the Milton 18-year-old charged in connection with the insurrection at the U.S. Capitol on Jan. 6, wants to go home to his parents.

In a letter to U.S. District Court Judge Randolph D. Moss on Thursday, Cua begged to be reunited with his family as he awaits trial, promising “not to step one foot out of line.” Cua has been in custody since his arrest on Feb. 5, and has appealed an earlier court ruling denying him bond.

“I will never be the same person, jail has had its full effect me (sic), I am completely humbled, deeply remoursefull (sic) and regretful!” Cua wrote. “After all, thats (sic) what jail is for right? Teaching people a lesson? Lesson fully received, your Honor.”

Cua, 18, is facing multiple charges including assaulting a federal officer, and has been in jail since Feb. 5. His parents drove him from Atlanta to D.C. for the so-called “Stop the Steal” rally. Prosecutors say the teen shoved a cop and made it all the way to the Senate floor. Videos show him carrying a baton through the halls of the Capitol.

Young MAGA terrorist pleads to go home from jail to mom and dad…yeah, no. His parents drove him to DC for this…they should be arrested too

Bruno Joseph Cua, 18, is facing multiple charges including assaulting a federal officer, and has been in jail since Feb. 5. https://t.co/S76S03ixhn

ARRESTED: Bruno Joseph Cua, 18, from Milton, GA is charged with ASSAULT against a federal officer: “This is the third time he’s [Trump] tweeted about it. This isn’t a joke, this is where & when we make our stand Fight for Trump” https://t.co/X1QYlz70FN pic.twitter.com/N27ZryJYHR