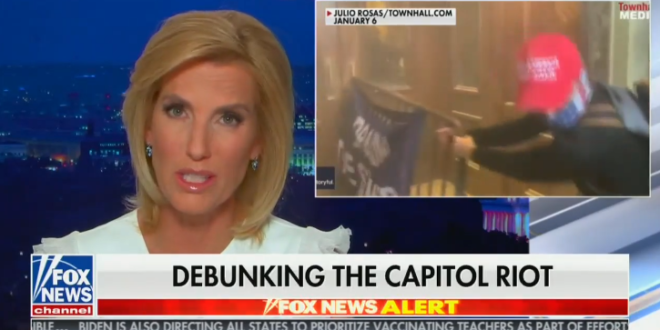 Laura Ingraham baselessly contradicted Tuesday’s testimony of FBI Director Christopher Wray during a curious segment focused on the Capitol Insurrection on The Ingraham Angle; the segment opened with a highly edited portion of his testimony.

She appeared to forgive many involved for getting “kind of swept up in” the Capitol attack, saying “people were just walking around and they walked around and the next thing you know, there was some crazy stuff happening.”

“The idea that for fur boy with the red, white, and blue and some of the other nuts in there were some sort of coordinated — it’s just a bunch of idiots, and some of them criminals … to the naked eye, it didn’t look coordinated,” Ingraham dismissed.

Read the full article. As those of you who watched Wray’s testimony know, he described the attack on the Capitol as coordinated and pre-planned by white supremacists and militia members.