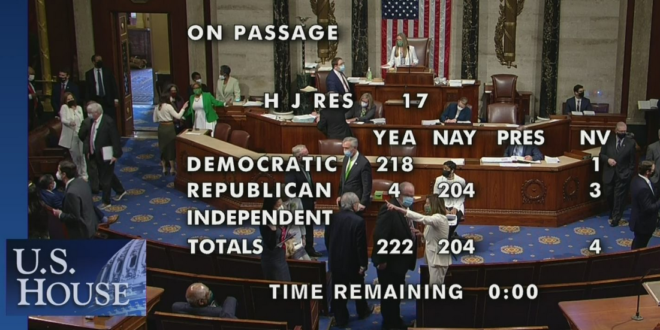 The House voted 222-204 on Wednesday in another attempt to eliminate a deadline passed in 1982 that has prevented the Equal Rights Amendment from becoming part of the Constitution.

The big picture: The decades-long fight over the amendment to afford men and women equal rights has been revived after Virginia claimed last year to be the final state needed to ratify the ERA.

Catch up quick: The amendment, which was first proposed in 1923 and passed in 1972, stalled in 1982 after 35 of the 38 necessary states approved it by the extended ratification deadline.

JUST IN: The House voted 222-204 today in another attempt to eliminate a deadline passed in 1982 that has prevented the Equal Rights Amendment from becoming part of the Constitution. https://t.co/m5A12ySgBO

Proud to preside over House this morning for bipartisan effort to extend Equal Rights Amendment deadline because women’s rights and democracy shouldn’t have a timeline! 🇺🇸#ERANow pic.twitter.com/mcts1BzhDQ

When we support women, we uplift all communities.

Adopting the #ERA would allow us to fulfill the American values of inclusion and equal opportunity for all. I voted to remove the deadline for ratification of the Equal Rights Amendment. #ERANow pic.twitter.com/SqPcgOZMtP

Congress does NOT have the constitutional authority to retroactively remove the deadline of the so-called “Equal Rights Amendment” to the Constitution that FAILED 40 years ago and EXPIRED in 1979! pic.twitter.com/GeTk6oJ3q8

The so-called Equal Rights Amendment is designed to do one thing:

Abortion on-demand up until birth and perhaps after birth

That’s why I OPPOSE the ERA. pic.twitter.com/fWhpRWCGkj