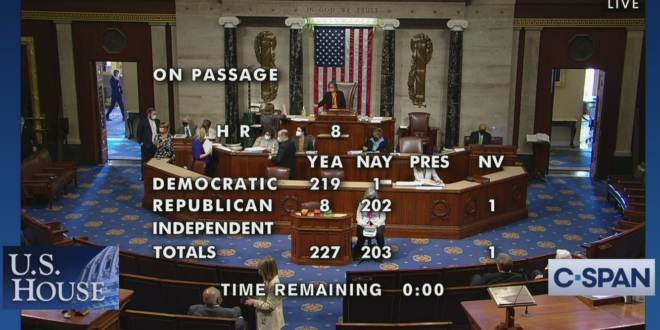 The House passed two bills Thursday that would tighten gun sales regulations, sending the measures to a divided Senate.

H.R. 8 would expand background checks on individuals seeking to purchase or transfer firearms, and the Enhanced Background Checks Act of 2021 would close the “Charleston loophole,” a gap in federal law that lets gun sales proceed without a completed background check if three businesses days have passed.

“This bill is a critical step toward preventing gun violence and saving lives,” Rep. Mike Thompson, D-Calif., who sponsored H.R. 8, said before its passage.

Senate Majority Leader Chuck Schumer said Thursday that the Republican “legislative graveyard is over” and that the bill to require background checks on all firearms sales will have a vote in the Senate.

“A vote is what we need,” Schumer said, and they will find out where Republicans stand. “Maybe we’ll get the votes,” he said. “And if we don’t, we’ll come together as a caucus and figure it out how we are going to get this done. But we have to get it done.”

We’re so glad to see that the House has passed universal background checks in a vote of 227-203!

Most of the Republicans who voted to make it easier for criminals to obtain guns took thousands of dollars from the @NRA. pic.twitter.com/ghoOLZqqoD

Maine Blue Dog Jared Golden has, in effect, already joined the GOP. This morning he was, again, the ONLY Democrat to vote with the Republicans, this time against the Bipartisan Background Checks Act. 8 Republicans helped it pass 227-203. Has a primary opponent emerged yet? pic.twitter.com/VxJNShkB9I

The last Republican was Kinzinger and the Democrat was Golden, per @AlexNBCNews