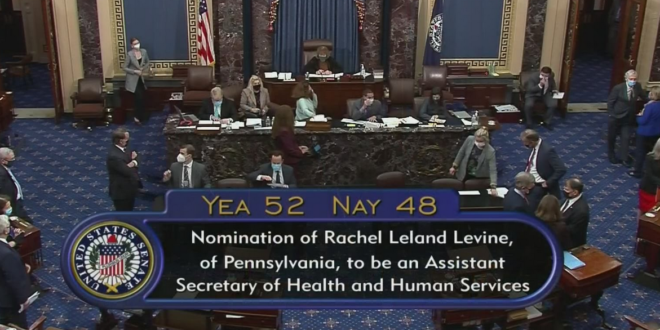 The Senate on Wednesday confirmed Dr. Rachel Levine as assistant secretary of health at the Department of Health and Human Services, the first out transgender federal official to be confirmed by the chamber. The vote was 52-48. Levine, a pediatrician, previously served as Pennsylvania’s secretary of health and as physician general — the state’s top health official and top doctor. “The confirmation of Rachel Levine represents another important milestone for the American LGBTQ community,” Senate Majority Leader Chuck Schumer said.

History made: Dr. Rachel Levine was just confirmed as the next Assistant Secretary for Health, becoming the first-ever openly transgender federal official confirmed by the Senate.

Trans people are leaders, innovators and change-makers — and we deserve a seat at every table. pic.twitter.com/bNotSqaWDu