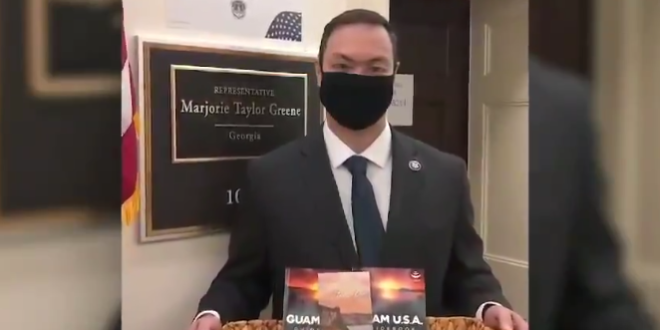 Guam Del. Michael F.Q. San Nicolas paid a visit to the office of Rep. Marjorie Taylor Greene (R-Ga.) on Monday after the QAnon-backing lawmaker betrayed an apparent lack of knowledge about the Pacific island at the Conservative Political Action Conference.

San Nicolas, accompanied by a group of National Guard members from Guam, missed seeing Greene, but spoke to an aide, who thanked the group for a gift basket of cookies.

Guam has been a U.S. territory since 1899, and its residents have been American citizens since 1950. The island bills itself as “where America’s day begins” due to its location in the western Pacific.

After QAnon terrorist Marjorie Greene stupidly called Guam a foreign land, Guam Rep. Michael F. Q. San Nicolas and members of the Guam National Guard paid the office she’s in a visit. Guam has been a US territory since 1898, its residents are US citizens.pic.twitter.com/Xj0BRES8HH