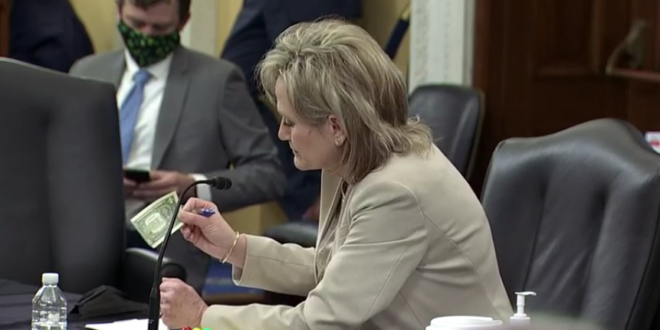 GOP Senator: Voting On A Sunday Is Against Jesus

“Why did the Georgia legislature only pick Sundays to say there should be no early voting on Sunday?” Schumer said on the Senate floor. “We know why. It’s because that’s the day African Americans vote in the ‘Souls to the Poll’ operation where they go from church to vote. It’s despicable.”

Later, during a Senate committee hearing, Hyde-Smith said she wanted to address the question Schumer raised about Sundays. “Georgia is a Southern state just like Mississippi, and I cannot speak for Georgia, but I can speak for Mississippi on why we would never do that on Sunday,” she said.

The Bible, she went on, says to “remember the Sabbath and keep it holy. So that is my response to Senator Schumer.”

Read the full article. The Post notes that Hyde-Smith took her oath of office on a Sunday. As you’ll see in the clip, she pulls out a dollar bill to rant about “In God We Trust” and quote from Exodus.