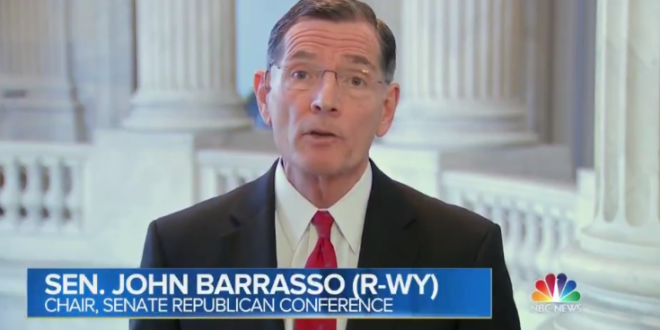 Sen. John Barrasso said Sunday he’d back Alaska Sen. Lisa Murkowski for reelection, breaking with former President Donald Trump not long after he vowed to campaign against her.

“I want to always make sure we nominate somebody who can win in November,” Barrasso, the No. 3 Senate Republican, said on NBC’s “Meet The Press” of the 2022 midterm elections. “Lisa Murkowski knows Alaska better than anybody, and she’s an incredible fighter for American energy.”

The Wyoming Republican cautioned that Murkowski — who has held her seat since 2002 — has not officially declared she would seek another term, but “if she does, I’m going to support her.”

Why is @lisamurkowski staying in Trump’s Racist Republican Party? https://t.co/7lF754jY0I

If @POTUS is serious about a bipartisan infrastructure deal, he should take a look at the bipartisan highway infrastructure bill we passed unanimously in Senate #EPW Committee last Congress. Even @SenSanders voted for it. pic.twitter.com/I2F66feUXh