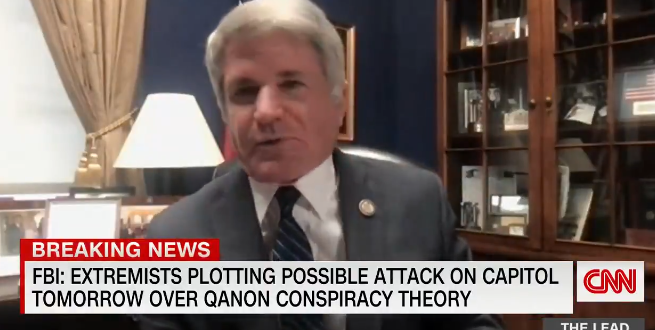 GOP Rep: The Threat Against The Capitol Is Credible And Trump Should Tell His Cultists To “Stand Down”

Rep. Michael McCaul (R-Texas) said former President Trump should tell his supporters to stay away from Congress Thursday as intelligence indicates a right-wing militia could be planning an attack on the Capitol.

“I think President Trump has a responsibility to tell them to stand down. This threat is credible and it’s real,” McCaul said on CNN Wednesday.

McCaul’s call comes as authorities warn that online chatter indicates an attack is being planned on the Capitol on Thursday. Capitol Police warned in a statement Wednesday that it has “obtained intelligence that shows a possible plot to breach the Capitol.”

Rep. Michael McCaul says fmr. Pres. Trump has a responsibility to tell extremists, who believe Trump will be inaugurated on March 4, and who the FBI say are plotting a possible attack on the US Capitol, to stand down. “This threat is credible. It’s real.” https://t.co/txZq2tbwMH pic.twitter.com/n4X4WbwTIo

Previous QAnon Rep Opposes Equal Rights For “Transexites”
Next Fox Host Blames Victims Of Sexual Harassment: Why Don’t They Just Slap Men In The Face As It Happens?