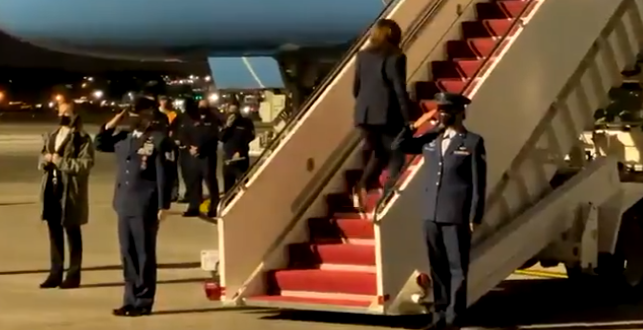 Fox Attacks Harris Over Lack Of Salute To Honor Guard

Trump infamously saluted a North Korean general, but here we are again:

Kamala Harris doesn’t salute members of the military as she gets on Air Force Two, breaking with a customary tradition of respect

Remember when she and Joe Biden tried to sell the lie that *Trump* was the one who didn’t respect the troops?

DISGRACEFUL: @VP Kamala Harris refuses to salute the honor guard at the steps of the aircraft. It is a clear demonstration of her dislike for those in uniform, both law-enforcement and military. pic.twitter.com/7QFHzamnt7

It is hard to overstate the damage the network is doing to our sense of patriotism.

Hannity in 2014, after Obama salutes American troops with a cup of coffee in his hand: “Shocking”

Hannity in 2018, after Trump salutes a North Korean general: *Silence*https://t.co/NhjtKzGydo