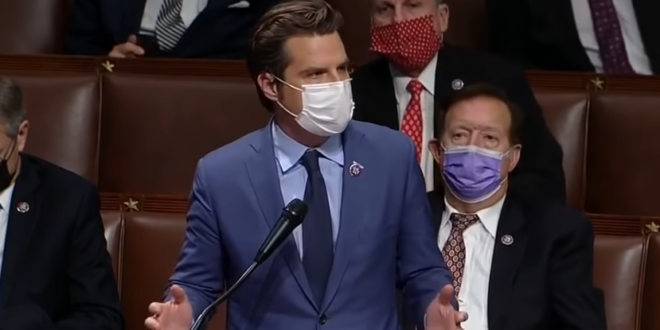 Gaetz told Fox that the former DOJ employee going after him was David McGee, now a lawyer at Beggs & Lane. In an interview with The Daily Beast late Tuesday night, McGee said any reports of extortion involving him or his firm were “completely, totally false.”

“This is a blatant attempt to distract from the fact that Matt Gaetz is apparently about to be indicted for sex trafficking underage girls,” McGee said.

Before the Fox interview Tuesday night, Gaetz used his Twitter to call on the Justice Department to “immediately release the tapes, made at their direction, which implicate their former colleague in crimes against me based on false allegations.”

Matt Gaetz is accusing David McGee of crimes. McGee is the former 1st Asst at US Attorney’s Office and was Lead Attorney for a US DoJ Organized Crime Task Force. He’s received honors from the Secret Service and even a special commendation from the FBI Director. Just to be clear.

He says that the FBI and DOJ have audio recordings that will prove his innocence. pic.twitter.com/J95AEFtxsr

In an interview, McGee said, “This is a blatant attempt to distract from the fact that Matt Gaetz is apparently about to indicted for sex trafficking underage girls.” https://t.co/IH45FK31cX

So it gets weirder and weirder.

The lawyer Gaetz is claiming blackmailed him, the “former DOJ official” who Gaetz says told him could make the investigation go away, a lawyer named David McGee, hasn’t been employed by the DOJ for more than fifteen years.

This makes NO sense.