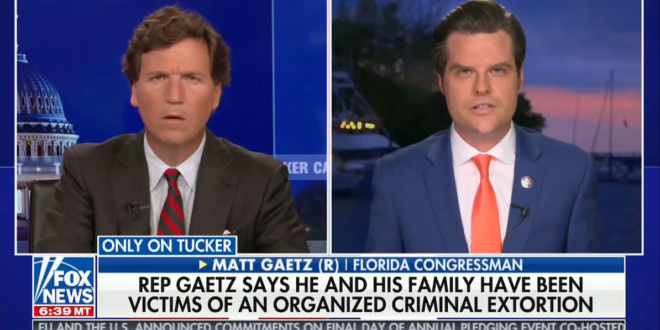 Law & Crime has their statement:

Congressman Matt Gaetz made an allegation on The Tucker Carlson show last night that David L. McGee, a partner in the firm of Beggs & Lane, had attempted to extort money from Gaetz and his family in exchange for McGee making the investigation against Congressman Gaetz “go away.”

The allegation by the Congressman is both false and defamatory. Mr. McGee was the Chief Assistant United States Attorney for the Northern District of Florida 25 years ago.

During his tenure with the Department of Justice his reputation for integrity and ethical conduct was impeccable.

It has remained impeccable throughout his 25 year tenure with our firm. While he was with the DOJ he would never have entertained a scheme such as what Congressman Gaetz suggests nor would he today. Unsubstantiated allegations do not change that fact.

Previous 13 Republican AGs Sue Biden Admin Over COVID Relief Bill Because They Can’t Use Money For Local Tax Cuts
Next Matt Gaetz Admits Speaking With Newsmax, OAN, Fox News, And Other Outlets About “Life After Congress”