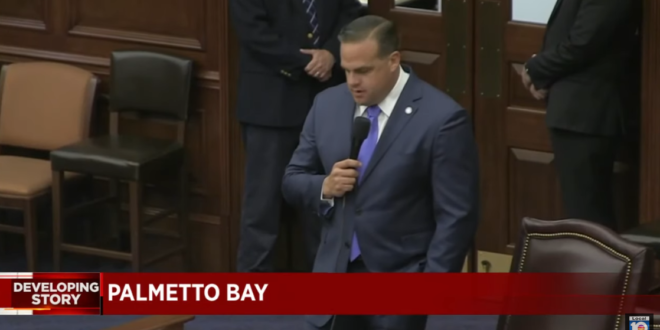 Artiles, himself a former state senator, was seen arriving at the Turner Guilford Knight Correctional Center, along with his lawyer.

His surrender came one day after the Miami-Dade State Attorney’s Office Public Corruption Task Force executed a search warrant at his Palmetto Bay house. Authorities are expected to announce details of the charges at a press conference Thursday afternoon.

According to a warrant obtained by Local 10 News, investigators say Artiles offered to pay Rodriguez $50,000 — half during the election and half afterward — for Rodriguez to enter November’s District 37 state senate race, where he shared a last name with the incumbent Democrat candidate Jose Javier Rodriguez.

In total, investigators found that $44,708.03 was paid by Artiles to Rodriguez “for changing his party affiliation, qualifying as an independent candidate for Senate Seat 37, and attempting to [siphon] votes from the incumbent candidate.”

From Alex Rodriguez‘s attorney… arrest warrant shows he (the shill candidate) has been spilling the beans on Frank Artiles since the day police brought him in for questioning.@WPLGLocal10 pic.twitter.com/PAugmvEe8u

#BREAKING: Ex-GOP State Senator @Artiles40 — who resigned after belittling Black lawmakers and using the N-word — UNDER ARREST in election fraud case into whether he illegally funded shill candidate in 2020 race #BecauseMiami https://t.co/S9P68XqrmJ

“Republican challenger @IleanaGarciaUSA ultimately defeated Jose Javier Rodriguez @JoseJavierJJR by just 32 votes for that seat. The plant candidate Alex Rodriguez got over 6,000 votes despite not actually campaigning, nor having actual political aspirations.”