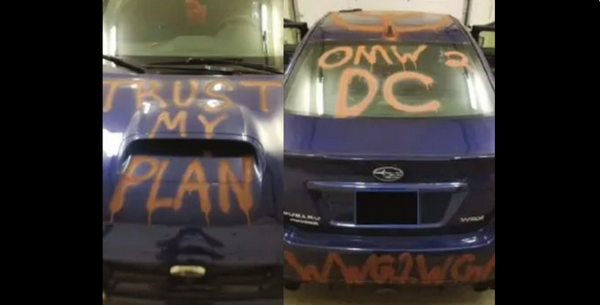 A QAnon supporter allegedly fired paintball rounds at Army reservists at the Wisconsin Army Reserve Center in Pewaukee on Monday, authorities said. Defendant Ian Alan Olson, 31, drove a Subaru covered in spray-painted QAnon slogans, stepped out, yelled “This is for America,” and shot two or three rounds from an AR-15 style gun, according to the FBI.

His sedan featured spray-painted message like the letter Q on the passenger-side doors, “Trust my Plan,” on the hood, “WWG1WGA” (meaning the QAnon slogan “where we go one, we go all”) on the rear bumper, and “OMW 2 DC” on the rear window. Federal investigators said this last one was an apparent reference to the nation’s capital.

Olson, who made the 800-mile trip in a 2016 Subaru festooned with QAnon slogans, told a soldier on duty outside the Capitol that he was going to “test the National Guard tomorrow to see if they were loyal to the people or to the President,” that he was “willing to die to fulfill this mission,” and that his “actions would unite eight billion people,” the complaint says.

If he ended up getting shot by the National Guard, Olson contended, he would know the Guard was loyal to President Joe Biden.

If the National Guard didn’t shoot him, Olson claimed he would then know the Guard was loyal to the citizenry. He explained that he would be “taken over by the Spirit of Christ and lead the people to unity,” the complaint states, and that “things can only be resolved by the barrel end of a gun.”

Previous Politico: Trump Working To Take Down GA Sec Of State
Next Riot Prosecutor: Trump Could Be “Criminally Culpable”