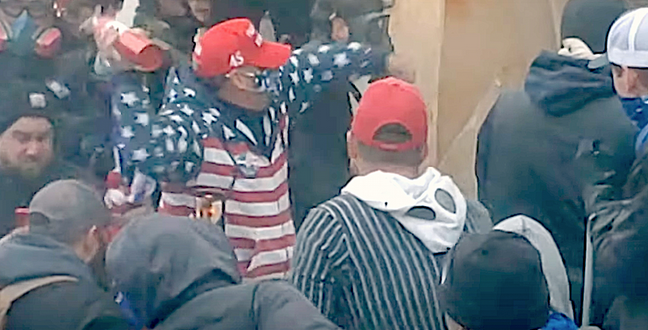 According to online court records, Robert Scott Palmer, 53, of Largo, Fla., is charged with assaulting, resisting, or impending officers or employees; civil disorder; and entering in or remaining upon restricted buildings or grounds with relation to the Jan. 6 siege on the U.S. Capitol Complex in Washington, D.C.

The FBI posted images showing the man’s face and the man’s acts on Jan. 6 while seeking information as to his identity.

An online sleuth known only as “Amy” worked with reporters from Huffpost to track the man’s whereabouts. MSNBC’s Rachel Maddow played video of the man believed to be Palmer using a fire extinguisher to battle police officers at the Capitol.

HuffPost, building on the work of citizen sleuths, first reported on his identity in a story on March 5.

NEW: #FBI Tampa arrested Robert Scott Palmer of Largo on charges related to his role in the U.S. Capitol riot on 1/6/21. Continue to check for updates on PACER and here: https://t.co/q07sKwr0Dm