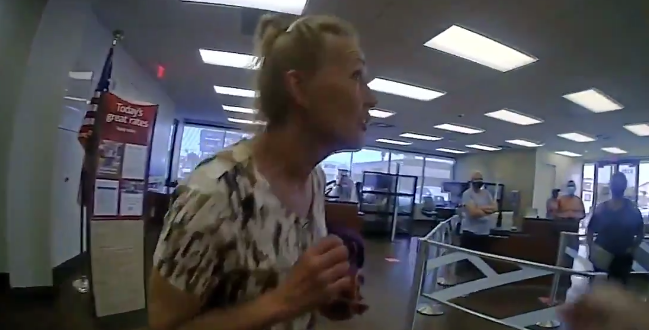 A woman accused of resisting a Galveston police officer earlier this month after being asked to leave a bank over her refusal to wear a face mask has been arrested again. Terry Lynn Wright, 65, was taken into custody Wednesday by Texas City police at an Office Depot, just six days after her arrest on criminal trespass and resisting charges.

Police were called to the Office Depot just after 9 a.m. after Wright was asked to leave the store by employees for refusing to cover her face, according to a statement from Texas City police. Wright was taken into custody on warrants related to the Galveston incident on March 11. She was transported to the Galveston County Jail.

Read the full article. In her previous appearance on JMG, Wright screeched that she refuses to a wear a “face diaper,” telling local news that the “plandemic” is a hoax.

Terry Lynn Wright’s arrest earlier this month was caught on camera. Now she’s accused of refusing to leave a Texas City Office Depot after refusing to wear a mask.​ https://t.co/uaQM5fEJzV