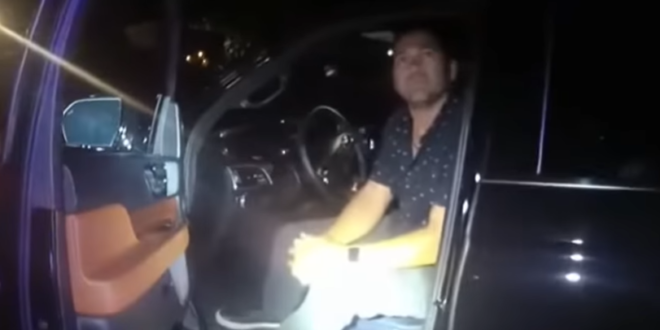 The former Yankees and Red Sox star was pulled over and arrested outside of his Orlando-area gated community on Feb. 19. He was charged with a DUI after registering between a .294 and .30 blood alcohol level. That is nearly four times the legal limit in Florida.

The video shows cops pulling over Johnny Damon and his wife who were both uncooperative with authorities from the start, with the two-time World Series champ appearing confused as to why he had been stopped.

“I know people are trying to target me because I’m a Trump supporter,” Damon told the cop looking for his ID. “I don’t think that has anything to do with it,” the officer replied. “Yeah, it does,” Damon concluded.

Damon’s wife, Michelle Mangan-Damon, who was in the passenger seat, also got out of the SUV and initially ignored commands to get back inside.

Mangan-Damon got out of the SUV again and tried to walk toward her husband. The officer then started to handcuff her, according to the video. “Don’t touch me,” she said. “Don’t fucking touch me.” A scuffle between her, Damon and the officer ensued, knocking his body camera to the ground.

Damon and his wife were handcuffed and taken to the Orange County Jail. He was arrested on driving under the influence. Mangan-Damon is facing charges of battery on a law enforcement officer and resisting officer with violence.

“I know people are trying to target me because I’m a Trump supporter.”

The body camera footage of exactly what went down when Johnny Damon was pulled over and eventually arrested by police on Feb. 19 was released.https://t.co/ZItBikWdOl

I was today years old when I learned, again, that Police know how to not kill people who resist arrest.https://t.co/B8ZW3WQvOS

Footage of Johnny Damon’s DUI arrest has been revealed and it’s disturbing https://t.co/ncQPrHhKjz