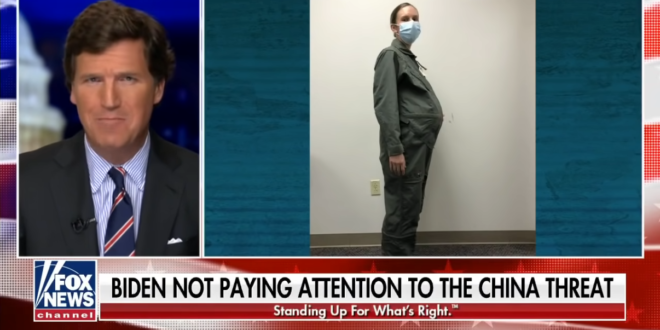 In an extraordinary rebuke, the Pentagon and several senior members of the US military called out Fox News host Tucker Carlson on Thursday for a sexist segment in which he mocked women serving in the armed forces. Speaking to reporters Thursday, Pentagon spokesperson John Kirby said the Secretary of Defense Lloyd Austin shared the same “revulsion” that many military leaders have expressed about the comments Carlson made.

Women lead our most lethal units with character. They will dominate ANY future battlefield we’re called to fight on. @TuckerCarlson’s words are divisive, don’t reflect our values. We have THE MOST professional, educated, agile, and strongest NCO Corps in the world. https://t.co/WeqWk6IWDq

Drama TV – my response to Mr. Carlson’s comments on women in the Armed Forces. @TuckerCarlson pic.twitter.com/acix7CFLO9

This is me, yesterday, conducting a re-enlistment for one of the tens of thousands of women who serve in our Army. Just a reminder that @TuckerCarlson couldnt be more wrong. https://t.co/M1MHe5zHrf

America’s army is made up of countless mothers and fathers. Being a parent (& being pregnant) does NOT negatively impact on our nation’s defense.

Contrary to what you may be hearing this 🇺🇸WOMAN & 1000’s of 🇺🇸WOMEN like her are NOT “making a mockery of our military”. You WISH your daughter was as AWESOME as MINE! so BACK OFF. #ARMY #Navy #USMC #USAF @16thSMA pic.twitter.com/h98tpKXPJn

I serve the people of the United States, and live the Army Values.#SoldiersCreed pic.twitter.com/O1ODKGr08b

I am a Warrior and a member of a team.#SoldiersCreed pic.twitter.com/2wypxAciuB

I am a guardian of freedom and the American way of life.#SoldiersCreed pic.twitter.com/mBgPhpylPA