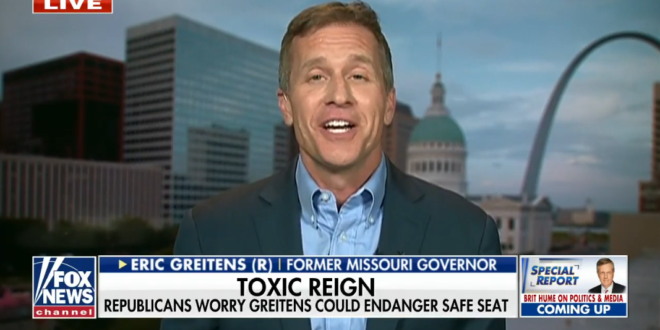 Former Missouri Republican Gov. Eric Greitens, who resigned in 2018 amid sexual misconduct and campaign finance allegations, announced Monday that he is running for Senate next year. Framing himself as a “fighter” and a stalwart backer of former President Donald Trump, Greitens unveiled his campaign during an interview on Fox News. He played up his time as a Navy SEAL and in the governor’s mansion while discrediting the allegations that prompted him to resign.

As a charismatic young governor, he earned mentions as a future presidential contender — until a devastating report landed from a St. Louis TV station in January 2018 that he had carried on an affair with a local hairdresser and threatened to release nude photos he’d taken of her if she revealed their relationship. After the report, Greitens admitted to the affair but denied any blackmail attempt.

The woman testified to the Missouri’s GOP-controlled state legislature that Greitens coerced her into oral sex, and Republican leaders threatened impeachment – but Greitens in the Fox News interview laid the blame on a “George Soros-funded prosecutor who went after us.” Greitens, like Josh Mandel in Ohio and Mo Brooks in Alabama, has positioned himself as the Trumpiest candidate in a potentially crowded primary field.