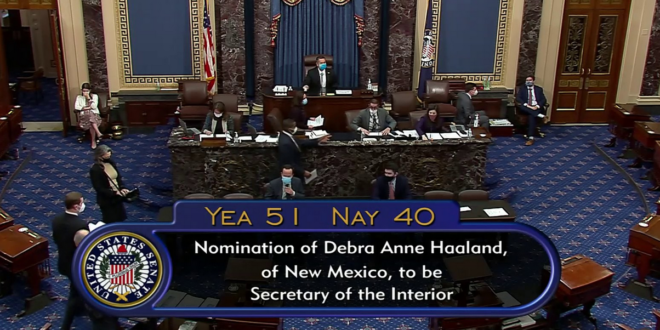 Deb Haaland, a member of New Mexico’s Laguna Pueblo, has become the first Native American cabinet secretary in U.S. history. The Senate voted 51-40 Monday to confirm the Democratic Congresswoman to lead the Interior Department, an agency that will play a crucial role in the Biden administration’s ambitious efforts to combat climate change and conserve nature.

Republican lawmakers grilled her over those stances during her confirmation hearing in an effort to portray her as a radical choice to manage the nation’s public lands, but Haaland struck a moderate tone, repeatedly saying that as Interior Secretary she would aim to accomplish Biden’s environmental goals — not her own.

Previous SD Gov Battles Biden Over Fireworks At Mt. Rushmore
Next At Least 100 US House Reps Haven’t Been Vaccinated