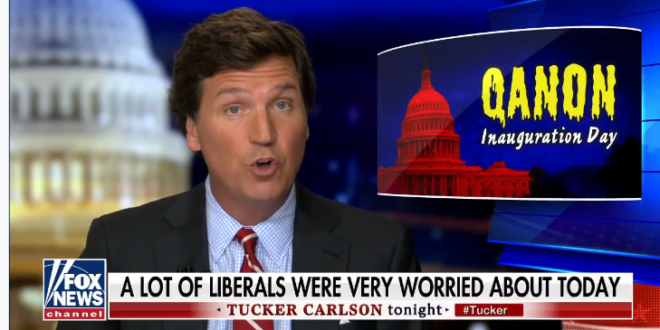 Carlson Shrugs Off Plot By “Vagrants” To Kill MI Gov

What’s “QAnon Inauguration Day”? We have no idea. We don’t know anyone who does know. In fact, we’d bet money that not one Trump voter in a million had ever heard of it until this week when the hysteria emergence on the other channels started yapping about it on television.

They’d heard about it from Nancy Pelosi who told her bodyguards to write up a report on the threat of “QAnon Inauguration Day.” So, that’s what they did.

Here’s the excerpt from the bulletin put out by the top minds at DHS and the FBI. “An unidentified group of militia, violent extremists has discussed plans to take control of the U.S. Capitol on or about 4 March.” Today.

Well, that sounds pretty scary. Another white supremacist insurrection? But, wait a second. Can we get some context — who exactly are these unidentified violent extremists?

And is the threat they pose more or less dangerous, for instance, than the plot by that homeless guy to kidnap the Governor of Michigan? The plot the FBI foiled just in time before a platoon of right wing vagrants could abduct Gretchen Whitmer in a shopping cart. We never really learned any details.