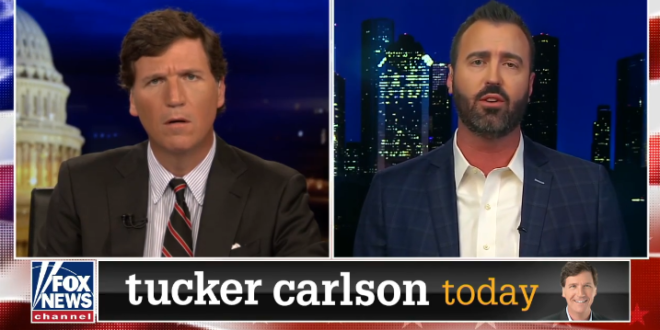 Carlson Guest: Dems Are Forcing GOP To Elect A Fascist

TUCKER CARLSON (HOST): I think you make a really solid point about the sadness and the powerlessness that people feel in the face of this. And some point people are going to say, “Why should I follow the rules? Why should I be a good citizen if they don’t have to follow the rules?” I mean, things kind of break down at some point, don’t they?

JESSE KELLY: They will break down, they are breaking down, Tucker. I have said this before, and I’m telling you I’m worried that I’m right, the right is going to pick a fascist within 10 to 20 years —

KELLY: — Because they’re not going to be the only one — the only ones on the outs. There’s 60, 70 million of us. We’re not a tiny minority, and if we’re going to be all treated like criminals and all subject to every single law, while antifa Black Lives Matter guys go free and Hunter Biden goes free, then the right’s going to take drastic measures.

“It feels like there is no justice out there. It feels as useless as going to a feminist rally and trying to find a woman who can cook.” pic.twitter.com/ALeUVblHwC