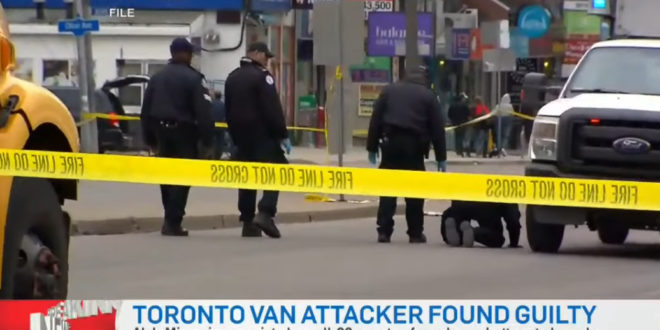 The man who planned and carried out the Yonge Street van attack in April 2018 is criminally responsible for his actions, a judge ruled Wednesday. Superior Court Justice Anne Molloy found Alek Minassian guilty of 10 counts of first-degree murder and 16 counts of attempted murder.

“He made a choice,” Molloy said in her decision live-streamed on YouTube. “He chose to commit the crimes anyway because it was what he really wanted to do.” On the sunny afternoon of April 23, 2018, Minassian “slammed the accelerator” of a rented van and sped onto a Yonge Street sidewalk directly at a group of pedestrians waiting at the intersection.

“There was no warning,” said the agreed statement of facts. “People were not prepared for such an attack.” Over the next four minutes, Minassian deliberately drove into 26 people, killing eight women and two men and leaving carnage and trauma in his wake.

Minassian, 28, told police he belonged to an online community of sexually frustrated men, some of whom have plotted attacks on people who have sex. Minassian, who said he never had a girlfriend and was a virgin, rented the van and admitted to police he used it as a weapon, saying he wanted to inspire more attacks.

He called himself an “incel”, short for involuntary celibate, an online subculture that has been linked to other attacks in California and Florida and that often promotes the idea men are entitled to have sex with women.

It was a beautiful spring afternoon in April when Mr. Minassian, driving a rental van he’d picked up just an hour earlier, mounted the curb of a busy sidewalk in the city’s dense north end, and plowed into pedestrians, sending bodies as far as 26 feet into the air and dragging others under the vehicle.

He finally stopped when a victim’s coffee splashed onto the windshield, blurring his view, and then attempted “suicide by cop,” by pretending he was armed and yelling at a police officer to shoot him.

The event was shocking for another reason: It was the first time many in Toronto heard the term “incel” — short for involuntary celibate, a self-claimed label for men who blame women for denying them sex.