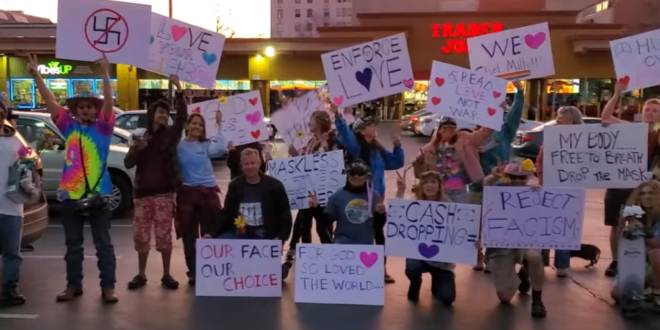 Anti-mask protesters returned to the Trader Joe’s in downtown Santa Cruz on Sunday but did not gain access to the store this time. Signs the protesters were wielding made references to loving one’s neighbor, breathing air freely, and stated, “Maskless Lives Matter.” One sign showed symbols of a circle-slash over a swastika.

The choice of symbolism on the signs is in line with National Maskless Day propaganda. Fliers around the city, which referred to the day as Freedom Day, urged people to walk “into a Nazi store without a mask and share the pictures and videos.”

The group heckled shoppers as the left the grocery store. One protester got in a mocking match with another shopper in which she asked if the shopper was wearing a jockstrap on her face.