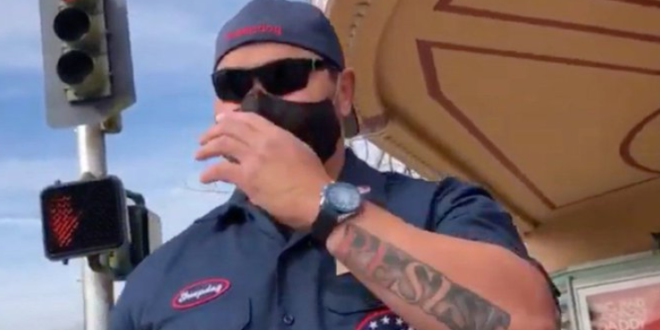 The Fresno Police Department is investigating one of its own officers after he joined the Proud Boys on Sunday morning to counter protest the sale of the iconic Tower Theatre to a church.

Officer Rick Fitzgerald was spotted in the YouTube footage posted by Eddie Block, a Madera man who is a former Proud Boy. Block’s home was raided by the FBI in late January.

After police became aware of the footage, Chief Paco Balderrama launched an internal affairs investigation, according to a statement released by the department Sunday night. Lt. Rob Beckwith later said the officer in question was placed on paid administrative leave.

For weeks, demonstrators in the central California farming hub have been outside the Tower Theatre hoping for sidetrack its sale to a church that critics claim is hostile to gay rights and marriage equality.

Those rallies have been frequently met by counter-protests, led by the far-right Proud Boys, and YouTube footage of Sunday’s dueling demonstrations allegedly showed a police officer among the self-described “Western chauvinists.”

A Fresno, Calif., police officer was placed on paid administrative leave after he was spotted at a Proud Boys rally.https://t.co/idgpqjRZxd

I tuned into Eddie Block’s channel just in time to catch him repeatedly call someone a “wetback” at the Tower Theater protests in Fresno. pic.twitter.com/GvDTxrjhSG

Eddie is out with a group called “Sons of 76”. Eddie called this man “Rick” and implied that he was a cop. Back in November, a man with matching tattoos was in Sacramento wearing Proud Boy gear. He also had “Sheepdog” name tags at that event. pic.twitter.com/PnmHSlaq4I

In another video, Eddie Block identifies the man who was photographed wearing Proud Boy colors back in November, as Officer Rick Fitzgerald of Fresno PD pic.twitter.com/G81SSoh8eN

Previous Brazilian President Bolsonaro Moves To Arm His Base
Next CDC: Trump Issued Bad Guidance Not Written By Us