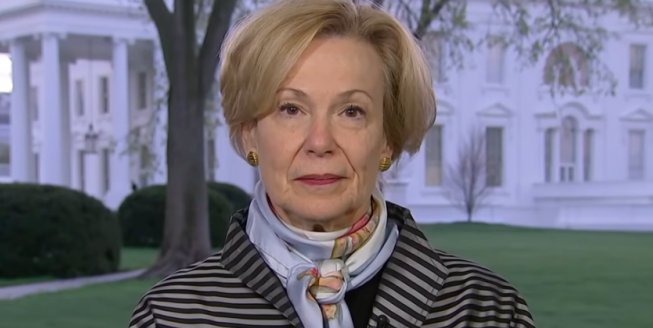 It was one of the most unforgettable, cringeworthy moments of Donald Trump’s presidency. And now, one of his key administration figures, who was in the room at the time, is opening up about sitting through it silently.

“Frankly, I didn’t know how to handle that episode,” Birx said. “I still think about it every day.” During that news conference, Trump floated the possibility of injecting disinfectant to another official who was in the room.

While Trump was mocked and condemned for suggesting such a dangerous idea, and his comments became symbolic of his response to the pandemic, Birx also was criticized for not speaking up more forcefully in the moment.

She said Monday her nearly three decades of military service had kicked in then, and that she only spoke briefly to say “not a treatment” when Trump asked her if ultraviolet rays and heat could be used to treat the coronavirus in people.

“You can see how extraordinarily uncomfortable I was,” Birx said. “Those of you who have served in the military know that there are discussions you have in private with your commanding officers and there’s discussions you had in public.”

Dr. Deborah Birx Opens Up About ‘Extraordinarily Uncomfortable’ Moment When Trump Proposed Injecting Disinfectant: ‘I Still Think About it Every Day’ https://t.co/TCaJ1QBGiP

“You can see how extraordinarily uncomfortable I was,” Dr. Deborah Birx says about the moment last year when she sat silently while former Pres. Trump raised the possibility of injecting disinfectant into people to treat COVID-19. https://t.co/Ta7pOW03jI pic.twitter.com/XQfPJ5NZs6