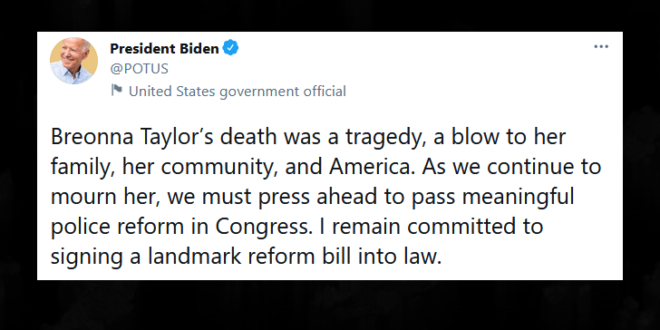 A large group of demonstrators gathered on Saturday to mark the first anniversary of the death of Breonna Taylor, who was fatally shot in her apartment by police officers executing a no-knock search warrant.

“All eyes are on Louisville today,” Bianca Austin, Taylor’s aunt, told the crowd. “And we are here to represent Breonna with dignity and respect.”

Taylor’s death and name continue to energize a racial justice movement and calls for police reform in Louisville and elsewhere. President Joe Biden acknowledged the anniversary Saturday afternoon, saying he remains “committed to signing a landmark reform bill into law.”

Breonna Taylor’s death was a tragedy, a blow to her family, her community, and America. As we continue to mourn her, we must press ahead to pass meaningful police reform in Congress. I remain committed to signing a landmark reform bill into law.