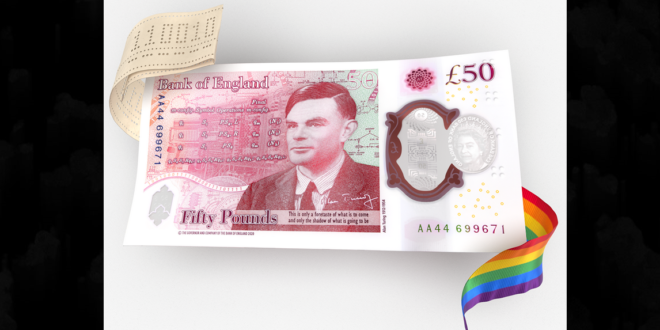 The Bank of England has revealed the design for the UK’s new £50 note featuring computer scientist and codebreaker Alan Turing. Turing was selected to appear on the note in July 2019 in recognition of his groundbreaking work in mathematics and computer science, as well as his role in cracking the Enigma code used by Germany in World War II.

The polymer note will enter circulation from June 23 this year, and incorporates a number of designs linked to Turing’s life and legacy.

These include technical drawings for the bombe, a decryption device used during WWII; a string of ticker tape with Turing’s birthday rendered in binary (23 June 1912); a green and gold security foil resembling a microchip; and a table and mathematical formulae taken from one of Turing’s most famous papers.

The note will be issued on Turing’s birthday. Its existence illustrates the importances of computer science and mathematics in modern society, as Turing’s bill joins those featuring Winston Churchill (£5), Jane Austen (£10) and artist JMW Turner (£20).

It also represents cultural progression — the UK government persecuted Turing for being gay despite his groundbreaking work, and now it’s celebrating him as a champion of the LGBTQ community.

Watch the Bank of England’s explainer.