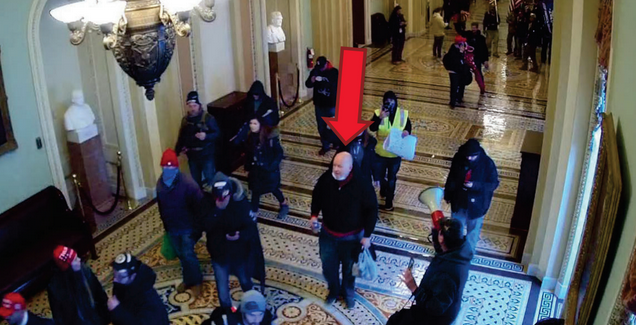 Another Alleged Rioter Ratted Out By Family Member

Les Little was texting with a family relative on Jan. 6 when he shared a secret: “We just took over the Capitol,” the Catawba County man wrote from inside the building, according to court documents unsealed Thursday.

“And you are bragging?” the relative fired back in a fusillade of exclamation points and capital letters. “’We’? THIS IS TREASON!!! IF YOU DON’T CONDEMN THIS, NEVER BOTHER SPEAKING TO ME AGAIN! HORRIBLE, HORRIBLE PEOPLE. IT’S A COUP! YOU OBVIOUSLY HATE AMERICA!!!”

In fact, the relative took it a step further and turned Little in. Now the 64-year-old Claremont resident has a date with a judge in Washington, where he has been charged with four crimes.

James ‘Les’ Little isn’t the first person from North Carolina to be turned in by family for the Jan. 6 break-in. https://t.co/opKjQYkhuF

“NC man brags in a text: ‘We just took over the Capitol.’ Angry relative tips off FBI.”

Arrested for participating in the insurrection / Trump riot on Jan. 6 in Washington, D.C.https://t.co/zF5SB6T78B pic.twitter.com/XbZvdecMxj

James “Les” Little has been accused of knowingly entering a restricted building without lawful authority and impeding or disrupting the orderly conduct of government business or official functions and can spend a dozen years in jail for it if up to me. https://t.co/ugQMshKksG