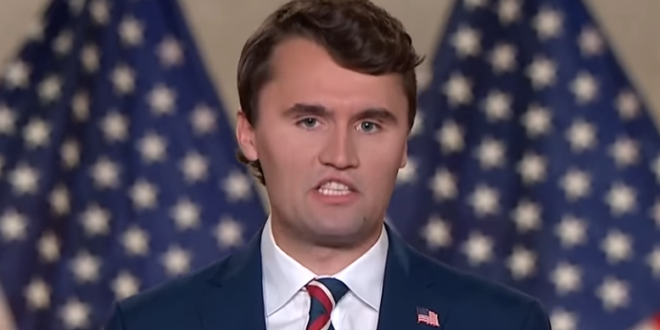 Accused Rioter Came To DC On Bus Paid For By Kirk

A retired firefighter who threw a fire extinguisher at police officers during the January 6 Capitol insurrection was put under pretrial house arrest on Tuesday. Robert Sanford had surrendered himself to federal authorities on multiple charges nearly a week after the insurrection. HuffPo’s Ryan J. Reilly reported that according to Sanford’s attorney, the defendant traveled to Washington, D.C., on a bus organized by Turning Point Action, founded by Trump loyalist Charlie Kirk.

Following the insurrection, Kirk deleted a January 4 tweet saying his organization was sending 80 buses of former President Donald Trump supporters to the “Stop the Steal” rally on January 6. A Turning Point Action spokesperson claimed that the organization had sent only seven buses to the capital and that the student protests were not involved in the day’s violence. During his January 4 podcast, Kirk stated, “Turning Point Action is being financially supportive of that rally. We are sending buses.”

Judge ruled today that Robert Sanford, who threw a fire extinguisher at police during the Capitol insurrection, can be released pretrial with a GPS monitor. pic.twitter.com/VOmwMQlLgh

Here’s something I’d missed: an attorney for Robert Sanford — the man who was captured on video striking three police officers with a fire extinguisher — said in a filing over the weekend that Sanford had traveled to D.C. on a Turning Point USA bus. pic.twitter.com/cMS0Cx1ft8