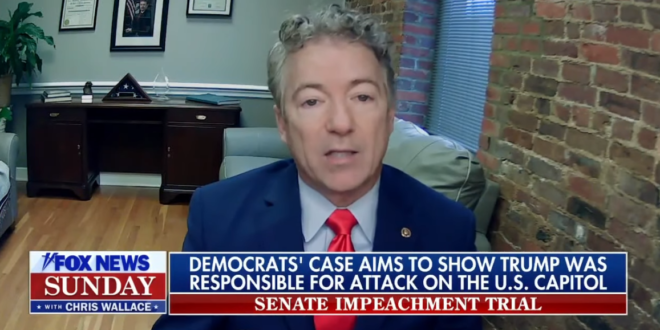 “If we’re going to criminalize speech, and somehow impeach everybody who says, ‘Go fight to hear your voices heard,’ I mean really we ought to impeach Chuck Schumer then.

“This inflammatory wording, this violent rhetoric of Chuck Schumer was so bad that the chief justice, who rarely says anything publicly, immediately said this kind of language is dangerous as a mob tried to invade the Supreme Court.” – Sen. Rand Paul, speaking today on Fox News.

Perhaps obviously, no mob “tried to invade the Supreme Court” after Schumer’s words. Reports on that day are here and here.

Previous Postal Workers Union Hopes For “Bold” Moves By Biden
Next Lindsey Graham: Trump Will Get “His Share Of Blame In History” For The Insurrection, “I’m Ready To Move On”