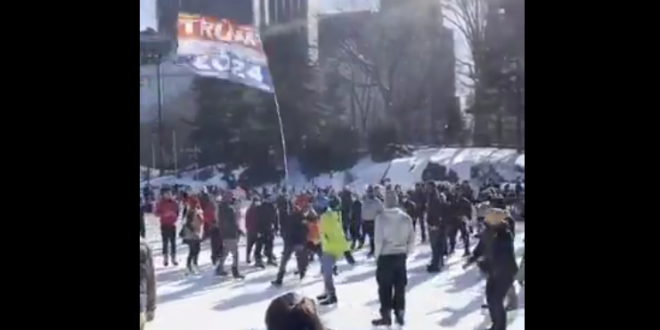 A man carrying a “Trump 2024” flag was tackled by an ice skater at Wollman Rink in Central Park over the weekend, video of the incident shows. The crowd of ice skaters booed the man, who was wearing a “Make America Great Again” hat, as he skated on the ice holding the flag, the video shows. He was then tackled by another skater as people nearby clapped and another person took the man’s flag away.

The cultist with the flag, Dion Cini, has made multiple appearances on JMG for similar stunts. He’s been banned from Yankee Stadium, CitiField, and all Disney parks for unfurling Trump banners.

He’s also been at the center of viral Trump-related bar fights and sometimes tows a Trump flag down the Hudson River from a kayak.

His most recent appearance on JMG came in December when he was part of a cultist mob that harassed passersby at Rockefeller Center.

Cini apparently targeted Wollman Rink because the city has ended the Trump Organization’s contract to operate the venue.

The party of unity !! People cheering as my friend @dioncini was attacked in Wollman Rink in Central Park for waving a Trump 2024 flag !! pic.twitter.com/8Wj5QOyFQs