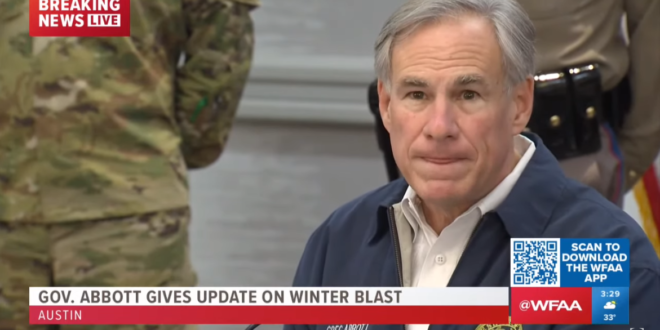 Texas Gov. Greg Abbott (R) called on the state legislature to investigate the Electric Reliability Council of Texas (ERCOT) after winter weather has left millions of Texans without power.

The Texas governor released a statement requesting that reform to the grid operator be prioritized as an emergency item during the legislative session to “ensure Texans never again experience power outages on the scale they have seen over the past several days.”

“The Electric Reliability Council of Texas has been anything but reliable over the past 48 hours,” Abbott said in his statement. “Far too many Texans are without power and heat for their homes as our state faces freezing temperatures and severe winter weather. This is unacceptable.

Ever wonder why TX has to do things like rolling blackouts during extreme weather? The answer is because we’re the ONLY state that has isolated our power grid from the rest of the country in order to avoid Federal regulation! https://t.co/GfqPZ9Tifp

Previous Pentagon Report Details Inroads By White Supremacists
Next Proud Boys Leader: We’re Here To Stay, Get Used To It