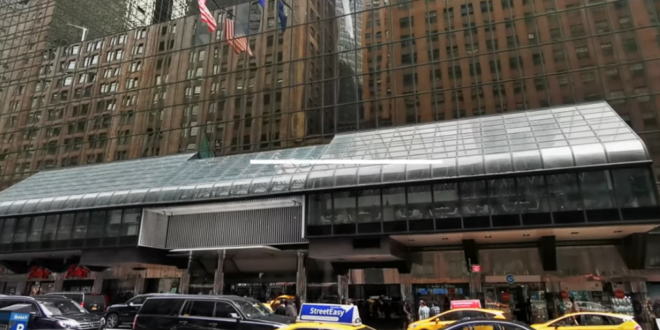 RXR Realty and TF Cornerstone are planning to replace the Grand Hyatt Hotel by Grand Central Terminal with a dramatic 1,600-foot, office-and-hotel tower known as 175 Park Avenue. Commercial Observer has the first look at the project, which includes new public space and significant renovations to the Grand Central subway station.

Former President Donald Trump, working on his first major development project, reclad the historic Commodore Hotel with a dark glass facade and reopened it as the Grand Hyatt in 1980. He received a controversial 40-year tax break that cost the city an estimated $410 million and expired last year.

The ground floor of the new 83-story, 2.2 million-square-foot tower will hold a new public train hall that adds street entrances to the station.

Read the full article. As with all things Trump, the project turned into a years-long morass of lawsuits which only ended in 1996 when his partners bought him out.