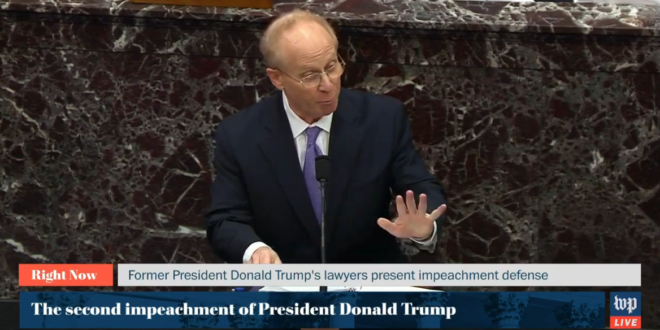 From an interview with Jewish Insider:

Trump’s legal defense got off to a rocky start on Tuesday with a speech by Castor that was maligned by many, including a number of the former president’s closest allies. That speech was a “spur of the moment decision,” Schoen explained — Schoen himself was originally scheduled to deliver the opening argument.

“The House put on a pretty good presentation. [Castor] seemed to think he was the best lawyer on the team, or something. So he stood up and said, ‘I think I better jump in here,’” Schoen recounted. “He jumped in and obviously it was like a filibuster. It was not a good presentation.”

“I thought, ‘This guy’s career is going to disappear. I don’t know how he’s going to get up in the morning,’” Schoen added. “He still thought he did a good job.”

Read the full article. At the very end of the interview, Schoen declines to say if Trump has paid him yet.

Trump impeachment defense attorney David Schoen told JI’s @marcrod97 that seeing the online speculation about his yarmulke “made me feel really awkward and kind of embarrassed.”https://t.co/wumEiBcNhV