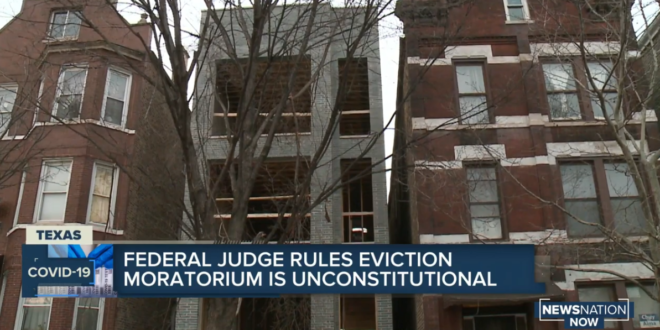 A federal judge in Texas on Thursday ruled that the federal moratorium on evictions is unconstitutional, according to court documents. US District Judge John Barker, who was appointed by then-President Donald Trump to the court in the Eastern District of Texas, stopped short of issuing a preliminary injunction, but said he expected the US Centers for Disease Control and Prevention to respect his ruling and withdraw the moratorium.

“The CDC attempted to use COVID-19 as an opportunity to grab power and the court rightfully corrected this egregious overreach,” Robert Henneke, one of the lawyers in the case and general counsel for the Texas Public Policy Foundation. The Department of Justice declined to comment when reached by CNN. It is not clear if the agency plans to appeal the case. An estimated 10 million renters were behind on their rent and at risk of eviction in the middle of January, according to a Census Bureau survey.

Read the full article. The Texas Public Policy Foundation is largely funded by the fossil fuels industry and devotes much of its time to discounting climate change.

A federal judge in Texas has ruled that the federal moratorium on evictions is unconstitutional, according to court documents https://t.co/QD7QRO42Oq

In a new opinion striking down the federal eviction moratorium, a Trump judge argues — I shit you not — that RENTING A HOME IS NOT AN ECONOMIC ACTIVITY!https://t.co/9nZEgD8EdP pic.twitter.com/7tb2umprXA

Here’s the basic explanation from Judge J. Campbell Barker, nominated to the federal bench by Trump at 37 and confirmed on a 51-47 vote: You see, renting your home may be an economic activity, but an eviction is not an economic activity! pic.twitter.com/jaq1O6SE8S

Previous Literal Golden Idol Of Trump Wheeled Through CPAC
Next South Dakota AG Was Reading Far-Right Site On His Phone At Time Of Crash, Victim’s Glasses Found In Car