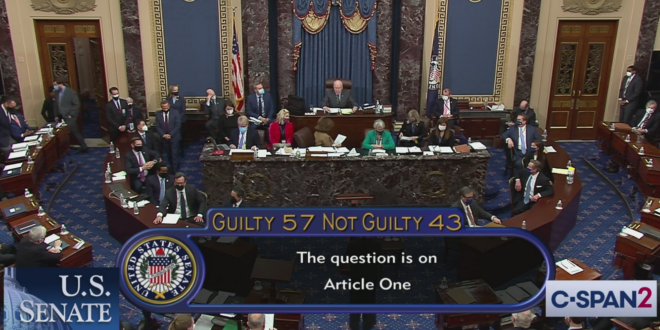 The Senate on Saturday acquitted former President Donald Trump in a 57-43 vote on the charge of inciting insurrection for his role in the Jan. 6 Capitol riot. Seven GOP Senators voted guilty in the most bipartisan majority to support a conviction. Democrats needed 17 Republicans to join them to convict Trump and hold a separate vote to bar him from running for office in the future.

The decision came after House impeachment managers reversed course and dropped a call for witnesses that would have delayed the verdict. The acquittal marks the end of a five day impeachment trial. Republicans who voted guilty were Sens. Richard Burr of North Carolina, Bill Cassidy of Louisiana, Susan Collins of Maine, Lisa Murkowski of Alaska, Mitt Romney of Utah, Ben Sasse of Nebraska and Pat Toomey of Pennsylvania.

The Senate voted 57-43 to acquit Trump, with just seven Republicans siding with all Democrats and independents, falling short of the 67 votes needed to convict. https://t.co/FpacW2xEm1 pic.twitter.com/z4uK0E1mlp

Senators acquitted Donald Trump on a vote of 57-43, failing to reach the 67 votes needed to convict him in his second impeachment trial. See how every senator voted: https://t.co/yoaCKPWk4W pic.twitter.com/EgqG9lh8ca