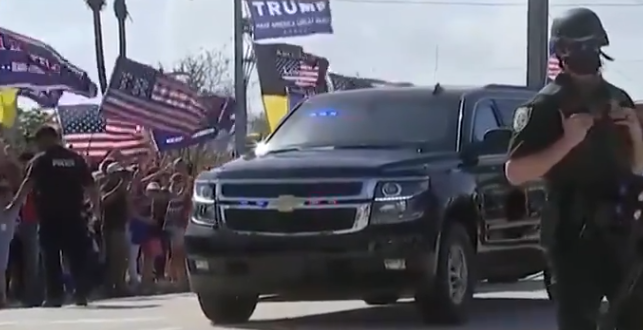 After days of keeping an uncommonly low profile, former president Trump reportedly re-emerged to slowly drive past a rally of die-hard supporters in West Palm Beach, Florida on Monday.  Video of the rally, which coincided with the President’s Day holiday, showed a raucous, largely unmasked crowd of supporters waving flags and Trump banners erupting in chants of “USA! USA!” as the former president’s motorcade drove by. A woman can be heard saying, “Everybody knows you won!” Others chanted, “We love Trump!”

JUST IN – Trump slowly drives past in motorcade at a spontaneous rally in West Palm Beach, FL on Presidents’ Day.pic.twitter.com/tuRlL1GwnO

From the Presidents Day Trump Rally near Southern Boulevard in Palm Beach, not too far from Mar-a-Lago! pic.twitter.com/Noo90e7hLJ