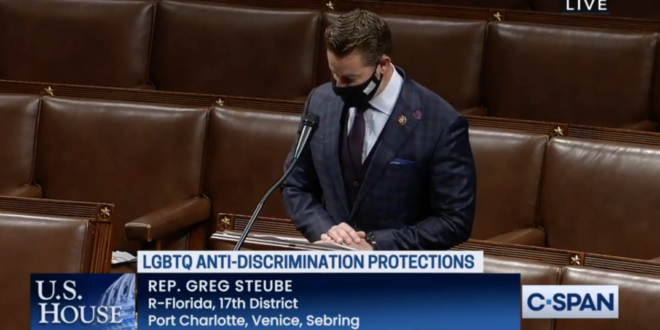 A Republican congressman sparked anger when he suggested that transgender people are an “offence” to God.

Florida lawmaker Greg Steube made the controversial comment during a debate in the House on the passage of the Equality Act, which would ban discrimination based on sexual orientation and gender equality.

The GOP member told the House he would begin his speech by giving them the “truth” as he read from Deuteronomy 22:5 in the Bible. “A woman must not wear men’s clothing nor a man wear women’s clothing, for the Lord your God detests anyone who does this,” he read.

Read the full article. Steube, first elected in 2018, was among the House reps who signed onto an amicus brief calling for overturning Biden’s win.

The suit worn today by GOP rep @gregsteube is the new teal belt. And you know what I mean. pic.twitter.com/phMIc35otI

GOP Rep. Greg Steube is reading from the bible about going to hell for dressing like a woman.

WOW: Rep. Al Green (D-TX)amazing response to GOP Rep Greg Steube who said God opposes transgender rights: “You used God to enslave my foreparents. You used God to segregate me in schools. You used God to put me in the back of he bus. Have you no shame?” pic.twitter.com/nrjVAgg6t3

Democrat Katie Hill calls out Republican Greg Steube on the #EqualityAct: “I can’t believe that we’re standing here and having a man tell me what kind of protections I need in sports. This is fear mongering about trans women playing in sports. Are you kidding me?” pic.twitter.com/RsGXm6a5Rs