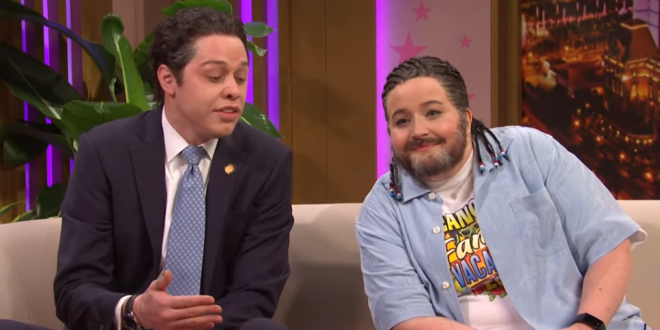 SNL Tees Off On Coumo And Cruz Scandals [VIDEO]

This week’s cold open began with a Britney Spears-hosted talk show called Oops, You Did It Again—and the guests joining Chloe Fineman’s Britney were none other than Aidy Bryant’s Ted Cruz, fresh off his embarrassing trip to Cancun during an energy crisis in his home state of Texas. Bryant’s Cruz emerged to roars from the crowd sporting braided hair, while balancing rollaway luggage in one hand and a pina colada with an umbrella in it in the other.

The show’s next guest was Gov. Andrew M. Cuomo of New York, played by Pete Davidson. Davidson first asked the audience if it had welcomed him “because indoor dining is back in New York,” then sheepishly acknowledged: “All right, I know. It’s because of the nursing home stuff.” Told that Mayor Bill de Blasio of New York thought he should be investigated, Davidson lashed out: “I will bury him in the tallest grave this city has ever seen,” he said.